You can compare your project to any other project. For example, you can use this function to evaluate automatically produced annotations, e.g. your project, to manual annotations.

In PubAnnotation, when a project is compared against another project, we call the former a study project and the latter a reference project. When the two projects include different sets of documents, only the documents shared by the two are considered, and the others are ignored.

The number of true positives (TP), false positives (FP), and false negatives (FN) are counted as below:

The precision (P), recall (R), and F-score (F) are then calculated as below:

Denotations and relations are evaluated separetely.

As explained in Format, a denotation is represented as a triple: < begin_offset, end_offset, label >.

Note that as a denotation is bound to a specific document, in fact, the character offsets, begin_offset and end_offset, should be prefixed with a document Id, e.g., docid:begin_offset, which is however omitted here for the sake of simplicity.

When we consider only exact matching between the study and reference denotations, comparison is performaed based on equibvalence, e.g., two denotations, \(d_1\) and \(d_2\) are equivalent to each other if and only if the three elements, begin_offset, end_offset, label, are the same between the two denotations. In the case, there is 1-to-1 correspondence between matching annotations. 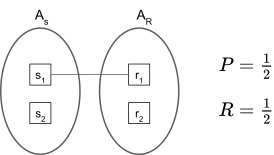 Once id-agnostic representation of relations is acheived, comparison between \(R_S\) and \(R_R\) is performed exactly the same way as the comparision of denotations.

A non-1-to-1-correspondence issue is resolved exactly the same way as the comparison of denotations.